Our Firm Remains Fully Operational. We are Committed to Providing Uninterrupted Client Services During the Covid-19 Crisis

Would you like to switch to the accessible version of this site?

Don't need the accessible version of this site? 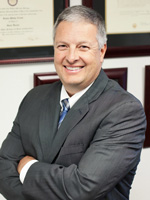 James P. Cronn is an accomplished Santa Ana family law and criminal defense attorney serving clients throughout southern California. Mr. Cronn has had appreciable litigation success with over 20 years of experience in the courtroom. He is a 1994 graduate of California State University, Dominguez Hills, and a 1997 law graduate of Southwestern University School of Law. Mr. Cronn was admitted to the California State Bar in 1997.

The bulk of Mr. Cronn’s professional practice is composed of family law litigation. He handles all aspects of California divorce, including child custody and support, alimony, property division, modification, and enforcement. The remainder of his practice is devoted to criminal defense. Mr. Cronn typically defends clients charged with driving under the influence (DUI) and domestic violence, but he has considerable experience representing clients charged with other criminal offenses as well.

Mr. Cronn has over 20 years of service in the armed forces, so he places special emphasis on military divorce and criminal defense of military servicemembers. He served four years on active duty as a marine in the United States Marine Corps, and over 16 years as a Staff Judge Advocate for the Commander in both the California National Guard and the Army Reserves. Mr. Cronn reflects on his military service experience to relate with his servicemember clients and advocate for them more effectively in civilian and military court.

Because he is in the business of helping people, meeting the needs of his clients is a top priority for Mr. Cronn. He personally handles every aspect of his clients’ cases beginning with the initial consultation. He communicates with clients directly to keep them informed of their case's progress, and to make sure they understand the process going forward. Mr. Cronn is dedicated to helping clients obtain a favorable outcome with their family law or criminal defense needs.

Outside of his law practice, Mr. Cronn is an active member of his community. He is an Executive Board member of a local elementary school’s Parent-Teacher Association, and Church Elder at the Tustin Presbyterian Church. Mr. Cronn also serves on the Board of Directors of Tustin Eastern Little League.

Have a Question or an Issue

Thank you. Your submission has been sent.

Attorney Advertising. This website is designed for general information only. The information presented at this site should not be construed to be formal legal advice nor the formation of a lawyer/client relationship. [ Site Map ]

See our profiles at Lawyers.com and Martindale.com